The development and deployment of an award-winning real-time environmental decision support system for the Okanagan Basin’s water managers, which has led to an increase in fish-friendly flows in the Okanagan River without compromising regional human water needs.

It was developed in concert with leadership provided by the Canadian Okanagan Basin Technical Working Group (COBTWG) and is an excellent example of how cross-disciplinary cooperation amongst agencies (First Nations, Provincial and Federal Governments), applied ecological science, inflow forecasting and technological advances in real-time data can result in win-win regional water management strategies, even in one of Canada’s driest regions.

The overall goal of the project, which was largely envisioned and championed by Dr. Kim Hyatt, Chair of the FWMT Steering Committee and Section Head at the Science Branch of Fisheries and Oceans Canada, Nanaimo British Columbia, was to provide a decision support system for resource managers to make in-season decisions that better balanced flood protection, socioeconomic and aquatic ecosystem values. Historically, human water needs tended to trump ecosystem values, but in the words of Brian Symonds, former Senior Hydrotechnical Engineer and operator of Okanagan Lake Dam when the project began in 2001: “If I don’t have to kill fish I won’t, but I need reliable, simple and timely information.”

The Fish Water Mangement Tool (FWMT) has helped water managers do just that. Since being in constant use since 2003, it has fundamentally changed the way fish and water managers manage water releases from Okanagan Lake and take into account the in-stream flow needs of fish. Prior to 2003, in the absence of FWMT water managers were frequently unable to comply with written guidelines aimed at balancing water supply and fisheries objectives. By contrast, following the development and use of FWMT, a study of ours published by the Canadian Water Resources Journal has shown there was a significant and sustained improvement in the balance of water management decisions with fish-friendly outcomes for kokanee salmon in Okanagan Lake and sockeye salmon in the Okanagan River. 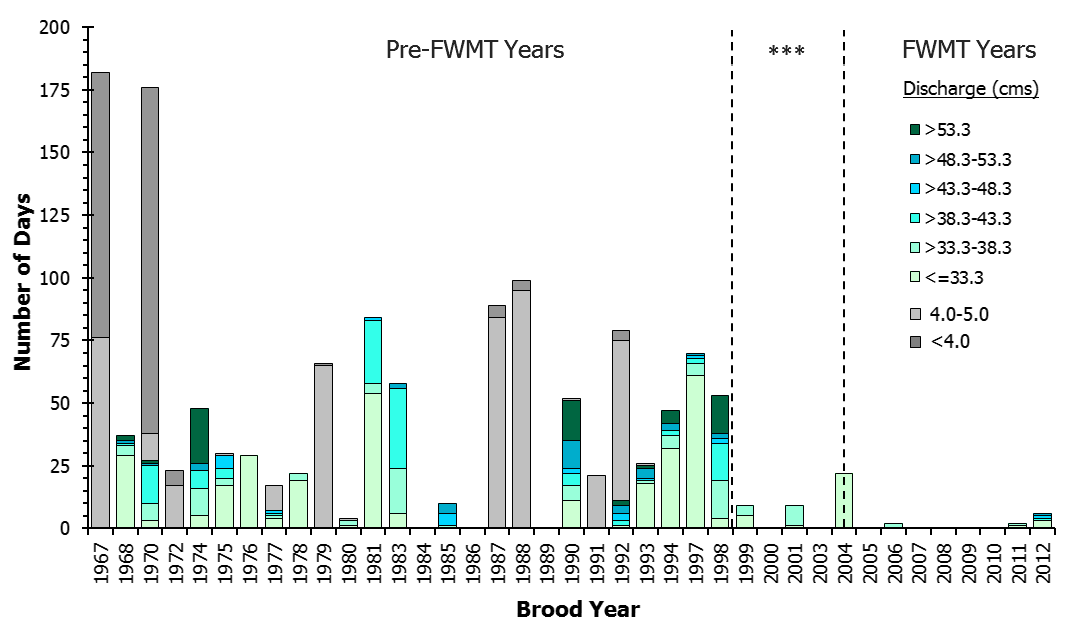 Summary observations from a before-and-after impact assessment of Fish and Water Management Tool (FWMT) deployment on compliance with fish friendly guidelines by fish and water managers during consecutive sets of years defined by: the absence of Okanagan Basin Implementation Agreement (OBIA) fisheries guidelines (pre-OBIA, 1967–1975), OBIA guidelines in force (1976–2013), where the latter then include pre-FWMT “control-years” (1976–1998), FWMT design-and-build years (1999–2002) and years of active FWMT use (2003–2013).

The Fish Water Mangement Tool (FWMT) has garnered the B.C. Premier’s Award for excellence in innovation and Murray A. Newman Award for Significant Achievement in Aquatic Conservation from the Vancouver Public Aquarium.

“There really isn’t anyone here at ESSA or in the COBTWG that isn’t proud of the lasting real-world results of the Fish-Water-Management Tool,” says Clint Alexander, President at ESSA and project lead for the FWMT. “This was definitely a highly pioneering effort, leading to the first of its kind real-time decision support system in British Columbia.”

The Okanagan Valley is an arid region punctuated with variable water supplies and periods of rapid spring snow melt.  Water managers are in charge of controlling a complex network of dams, dikes, irrigation networks, and flood control channels in the region where they are challenged by how to best navigate competing demands between people (flood protection, irrigation for farms) and aquatic ecosystems (avoiding inflicting high mortality on incubating and rearing fish).

The region is also prone hydrologic seesawing between drought and flood, with extreme seasonal, annual and inter-annual variation in water presenting further challenges.  As much as 90% of the annual inflow into the Okanagan Lake and River system occurs between March to June during the spring freshet.

In particular, the dam at the end of Okanagan Lake is the most critical feature of how the human and natural ecosystems above and below the dam experience water benefits, risks and achieve their needs. Given the multiple objectives of water management in the area — agricultural, drought and flood risk, plus maintenance of critical habitat for highly valued fish species — the high potential for conflict has led to a long history of federal-provincial engagement on water issues in the Okanagan. The latest iteration of these agreements, the 1982 Canada–BC Okanagan Basin Implementation Agreement (OBIA) specified the lake levels and discharge rates that would protect aquatic ecosystems and fisheries values without unduly compromising water management to satisfy human system needs. 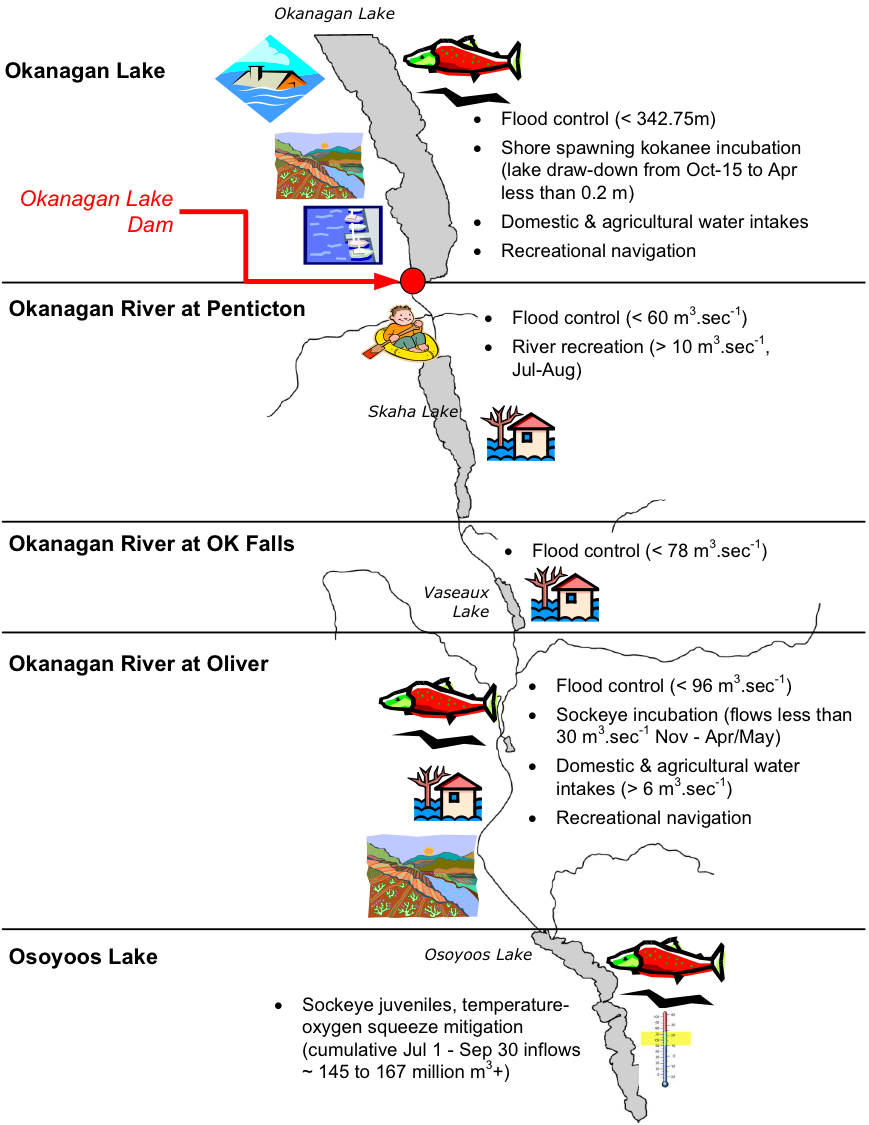 Boundaries for the five river and lake segments within the Okanagan Basin explicitly considered by the Fish and Water Management Tool (FWMT). Bullet points summarize the focus and timing of fish and water management objectives that must be considered within each geographic segment.

Water managers in the Okanagan Basin had difficulty meeting the agreed upon balance between  human-ecosystem lake levels and river flows.

Despite the 1982 OBIA agreement, historical compliance rates to meet fish-friendly flows was consistently low. An audit of water management performance between 1982 and 1997 identified that in those 16 years, river discharge exceeded the recommended flow range for sockeye salmon in 13 years of adult migration, seven years of spawning and seven years of egg incubation and fry migration. It’s not that front-line fisheries and water managers didn’t want to adhere to the OBIA agreement, but the means to do so in real-time in the presence of continual changes in inflows and related conditions eluded them.

In 1998, a multi-party team drawn from the hydropower industry, First Nations, the Provincial and Federal government agencies formed the Canadian Okanagan Basin Technical Working Group (COBTWG) and began a collaborative effort to design, build and deploy an environmental decision support system – the FWMT – so that resource managers could do a better job of managing water resources to meet both human and aquatic ecosystem needs.

Prior to the development of the FWMT the managers of the Okanagan Lake Dam made their decisions based on a variety of interconnected spreadsheets on how much water to release. These non-automated tools functioned on a much coarser level of detail and time scale, and did not directly automate time-varying biophysical calculations for fish (e.g., year-specific egg incubation and emergence times). This lower resolution information contributed to challenges meeting objectives.

Historic water management tools were also only routinely accessible by a small number of hydrotechnical engineers rather than a multi-disciplinary operations team.

“If you don’t predict accurately enough what’s going to happen with inflows and fish responses your ability to make up for mistakes drops through time,” explains Alexander, who was also our project lead on the Fish Water Mangement Tool (FWMT). “Conditions change on sub-weekly intervals and you need to know about those changes because you have to react –– nature doesn’t wait for you to come back from vacation.”

“While this is a computer tool project, the single most important reason for FWMT’s success was the shared commitment to high-quality science and the related trust building that happened while experts worked together to agree and compromise on what those best scientific components were for a tool like this,” says Alexander.

From start to finish the FWMT took only two years to complete and put into production and the early design steps carried out by the COBTWG members were the most critical, he says. “The process that was used to create the FWMT was just as valuable as the tool itself.” Through workshops and peer review collaborations to develop the FWMT, fish managers began to talk like water operators and water operators began to talk like fish managers, something that Clint Alexander has only seen a handful of times during his 20 years of consulting. “A tremendous amount of credit is shared deeply amongst numerous members of COBTWG during its tenure, but it would be disingenuous not to single out the vision, enthusiasm, commitment and dedicated expertise of Dr. Kim Hyatt and Brian Symonds,” he says.

When users login to the FWMT [GET PRODUCTION LINK], they can examine the different simulations of other users, and explore ways to balance the outcomes, all of which are evaluated in a traffic-light type suitability scheme: red means poor, green is good to go.

Screenshot of the FWMT login page

Screenshot of one output screen of the FWMT, showing lake elevation relative to targets.

“It’s been described as a slow computer game for fish geeks,” remarks Alexander. “Here are your objectives: flood control, irrigation intake levels, recreational targets, incubating and rearing sockeye indicators, Rocky Mountain Ridged Mussels and Kokanee survival and you’re job with the tool is to keep it all green.”

For such an incredibly complex system of water management on the ground, the intuitive, straightforward and durable user interface simplifies things for frontline managers and makes it very easy to point out that more often than not, other than extreme dry or extreme wet years, you have a range of flexibility to balance objectives. This is the beauty of FWMT: “What was missing was synthesizing the information in a simple, transparent way so you didn’t anchor decisions to an overly restrictive set of static written rules,” says Alexander.

Beyond its use as a day to day tool for water managers the FWMT has also provided a valuable backbone for maintaining institutional knowledge during staff turnover. Since its inception in 1998, the FWMT has been passed down through four different water managers, dramatically accelerating knowledge transfer and reducing training time for the Province. Typically when key people change, so too does the management regime, but having FWMT has provided valuable consistency to regional water management despite staff and leadership changes over the years.

“The Fish Water Mangement Tool (FWMT) has codified the scientific foundation for what fisheries managers, water managers and First Nations see as important,” says Alexander. “So a consequence of building a tool like this is a dramatic increase in the ability to pass on institutional knowledge and train new staff to get up to speed.”

ESSA is currently modernizing the FWMT to include a new anomaly detection component that will add additional climate aware features to the core hydrology component of the tool. The team has also successfully replicated the FWMT for the Nicola River in the Okanagan-Thompson subregion of the Okanagan.