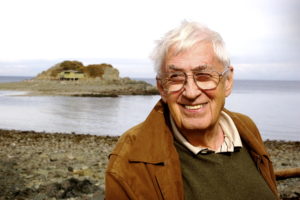 On August 16, the world lost one of its great scientific leaders, the father of resilience research, Crawford Stanley Holling (better known as “Buzz”). His amazing career is summarized here.

With roots extending back to the 1960s and 1970s, ESSA has been heavily influenced by Buzz’s work in resilience, systems thinking, and adaptive management. ESSA’s founders (Bob Everitt, Nick Sonntag, and Mike Staley) and those who joined ESSA not long after the company started (Mike Jones, Dave Marmorek, Peter McNamee, Tim Webb, Lorne Greig, and Pille Bunnell), were particularly inspired by Buzz – both intellectually and personally.

ESSA’s Tim Webb credits Buzz as being the “whole reason [he] came to Canada in 1979”. While Webb had a Commonwealth Scholarship to go to New Zealand to do his PhD, his fascination with Buzz’s work motivated him to pursue a Doctorate in Canada with Buzz as his supervisor.

Others remember him through poetry. The following is a poem that was written by Dave Marmorek for Buzz eight years ago:

For Buzz on his 80th Birthday

As a young man wondering what to do,
I sat in a big hall in Waterloo
And heard Buzz scattering his wisdom pearls
About a cute model that he’d named GIRLS*.
Not the curvaceous sort with dark brown eyes,
But a computer one all full of surprise,
Built by clever geeks working night and day
To search for and handle Gulf Island prey.

How cool!, I thought, to build predictive tools
And help people be smart, instead of fools;
To move beyond old minds’ paralysis,
Through insights gleaned from systems analysis.

Three years later that talk drew me out west,
To Buzz, Carl and Ray, and all of the rest.
As luck would have it one day I blundered,
Into a class called RE 500,
Which led to Buzz’s inner sanctum
Where he shared more pearls, and then I thanked him.

Over the years his ideas kept on growing,
With more and more cases clearly showing
System flips, resilience and panarchy,
And the folly of command / control hierarchy.

So many insights, so deftly explained
With kindness and humour, and so well retained,
By the tens of thousands that Buzz has inspired
Through all his work and after he retired,
And each of whom today feels truly blessed,
To have been touched by Buzz’s mind and zest.